You are here: Home1 / Press & News2 / Realization by Waterschapsbedrijf Limburg of initial Verdygo projects
Back to overview

In October 2015, with the official signing of contracts by all parties involved, Waterschapsbedrijf Limburg gave the go-ahead for the actual construction and development of the first Verdygo plants.

The projects at the sewage treatment plants in Roermond and Simpelveld together form a blueprint for a complete sewage treatment system using the Verdygo concept. In Roermond, the entire supply system will be composed of the booster systems, grids and sand collection. In Simpelveld organic treatment, including sludge thickening, will be replaced according to the Verdygo design concept.

The construction and development of the Verdygo plants in Roermond and Simpelveld will be done by a number of companies who have won the contracts following an extensive and meticulous tendering process. Aan de Stegge Bouw & Werktuigbouw (Construction & Engineering) from Goor is the main contractor and responsible for design and realization, Royal Haskoning/DHV for the innovative Nereda© treatment technology. Four suppliers will construct the tanks (ISS Tanks, SBE, Bestcon and De Groot Vroomshoop), while Croon will deliver the software for WAUTER, the central process automation system from which all 17 treatment plants and 141 pumping stations are managed and operated by Waterschapsbedrijf Limburg.
Definitive design

The definitive design is currently being developed. Aan de Stegge Bouw & Werktuigbouw are responsible for the design and realization of both projects. In addition, the company will in collaboration with Waterschapsbedrijf Limburg develop a blueprint for the Verdygo concept that can be used on future projects.

As soon as the final design is ready, in early 2016, the construction and execution can begin. The aim to complete both projects by mid-2016, with the one in Simpelveld completed first. The total investment for both projects is Euro 10.7 million. 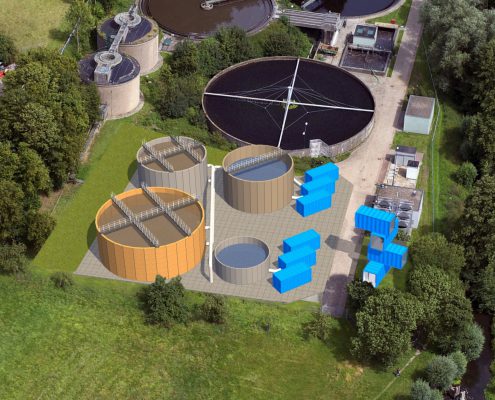 Back to overview
Tender process and Best Value: Simpelveld & Roermond

By continuing to use the site, you agree to the use of cookies. more information